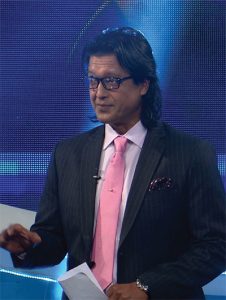 Mr. Rajesh Hamal is undoubtedly the most celebrated actor in the Nepali film industry. He has contributed more than 3 decades of his life to Nepali film industry. His reign as the one and true superstar of Nepal is only further cemented by having bagged the national film awards countless times. Mr. Hamal has been associated with Accretive Media Pvt. Ltd. as the host and advisor of the Quiz Mania, including the recent season of Asian Level Quiz Contest “Nobel Quiz Mania Season 6”. His dedicated contribution to the show has been the key to our success throughout the years through his expertise in captivating any audience and has shaken the industry which has immortalized him as the most powerful personality in media. He has also won the hearts of students and the audience with his personality which has been highly praised.  Both the students and the audience admire him for being an engaging and entertaining host for the show.